The weekend just gone saw us meeting, for the last time, at Rockingham Motor Speedway, in what was bound to be a memorable race weekend for all our drivers. The weekends weather was kind to us with settled warm days allowing optimum car set up from the get go.

Starting with qualifying for the MK1 MX-5’s Jack was the star of the show, with his best qualifying performance to date at his favourite track, he spent much of the session in 2nd Position, but a tussle in the final laps saw him drop to 4th Position, still his best result to date. The rest of the MK1 drivers all put in solid performances with Clive finishing in 5th Position, Marcus in 7th and Paul in 8th.

Following weeks of preparation through numerous track days focused on coaching and race craft Liz took to the wheel of the MK3 ready for the qualifying session. The hard work put in prior to the race weekend really showed with Liz taking a whopping 2.5 seconds off her previous fastest lap to place in 15th position for race one.

Following a brilliant qualifying session, Saturday brought the first Race for the MK1’s. The top ten were looking at a sea of black and red Tucker Motorsport line up. After great performances off the line first lap spins put Jack and Marcus down into last position, solid efforts throughout the remaining laps saw Jack and Marcus fight their way back up the order to 14th and 18th position, respectively. Following a hard fought race Clive finished in 13th and Paul in 21st. With everyone looking to make the most of possibly their last opportunity to race the Rockingham Speedway all the races were lining up to be hard fighting battles.

Jack and Clive were lined up and ready for their next MK1 A Race, a struggle off the line saw Jack yet again facing a mountain of positions to climb, something which he seems to relish as he crossed the finish line in 11th position. Clive, on the contrary, put in a good solid start and was comfortably holding 10th position, when his main crank pulley exploded, wiping out a coolant pipe, sending the car into a spin and also breaking the inlet manifold, causing the engine to cut out, needless to day this put him out of the running in race 2.

The dramatic action of the second MK1 A Race was quickly followed by the line up for the MK1 B Race the first few laps saw both of the Tucker Motorsport cars up front, with Marcus and Paul battling between themselves for 1st position. A red flag restart completed changed the race, closing up the pack and bringing other drivers into contention. With five drivers battling for the lead Marcus showed excellent race craft taking advantage of a green flag which other drivers had failed to see. This left Paul behind in 2nd fighting to hold onto the position, all was going well and a double Tucker Motorsport Podium was looking likely until another driver hit Paul on the brakes, spinning him into the concrete wall which borders the front half of the track at Rockingham.

A finish in 1st position for Marcus saw him move back up to the final MK1 A Race to join Jack. It would seem Jack is much more comfortable chasing down the pack, than having them chasing him, as once again he slowed off the start. Jack proved his form as he again slowly pulled himself through the field to finish in 10th position, a good move forward from his starting position. Marcus struggled starting from the back of the gird with no room to manoeuvre on the opening laps, as the race developed he gained more room to play with and got faster and faster, eventually finishing in 15th Position.

Following Clive’s dramatic exit from the second MK1 A Race the Tucker Motorsport crew had managed a full repair to his vehicle, which saw him lining up on the grid with Paul for the final MK1 B Race. Clive romped off from the pack right from the start, building on this incredible start lap and increasing the space between himself and the rest of the field lap after lap. This excellent performance saw Clive cross the flag in 1st Position, with a huge, and almost unheard of in MX-5 racing, 6 second gap between himself and second place. It was a rather different story for Paul, who following an incident on the start line was out of the running, bringing a close to his last Rockingham race, which proved memorable for all the wrong reasons. 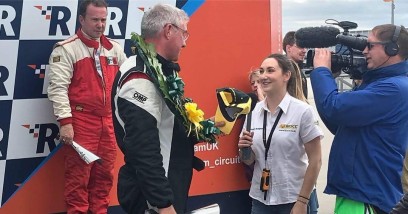 Away from the drama of the MK1 Races, the MK3 bouts seemed all the more civilised. Liz really showed the rest of the Tucker Motorsport Team how to ace a race start, with her really impressive rapid response to the lights, (Jack take note!). This impressive performance was not limited to quick responses off the line, showing a true race fearlessness Liz pulled moves on the first few corners, when grip is at it’s lowest along with tyre temperature, to make early race gains. These solid performances across all three races saw Liz finish in 14th, 11th and 13th position, a super weekend of racing with a further second and a half knocked off her fastest lap.

One of the final race fixtures for the championship and of course for the iconic Rockingham Motor Speedway venue saw a drama filled weekend of racing, with all drivers hoping to leave their mark on the circuit, some quite literally. We’ll be sad to see Rockingham gone from the championship, although with the amount of drama seen in this weekends racing, perhaps its all for the best! Now with a busy few weeks of preparation, test and coaching days we look forward to the final meeting of the year, Donnington.