Since it’s arrival to Tucker Motorsport in the middle of December our Swift SC92 Formula Ford Kent (FF1600) has certainly been keeping us busy. We were aware before welcoming the new car to the fleet that it was going to require an injection of TLC. That came in the form of a complete rebuild.

From the day of its arrival the Swift was straight into the workshop. With the enthusiasm we all hold for a new race car, the strip down was mightily quick.  We found ourselves down to a bare chassis in little over a day. As is always the way, from there the progress slowed. As the aesthetic changes stopped, so did the feeling of accomplishment, the real work was only just beginning. 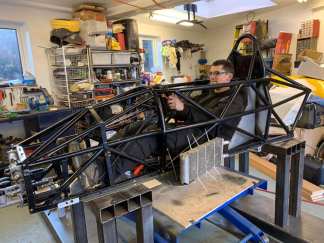 An unexpected job came in getting to grips with imperial measurements, and its many fractions in double speed. Being a British designed and built car from the 90’s the British motor industry were still digging their heels in over the incoming metric system, with it’s simple zeros and multiples! Fighting against a math migraine, the first job on the list to tackle was the floor. With several years of wear, it had become rather thin and weak in places. Always a worry when it’s all that’s keeping your bum off the asphalt at over 100mph!

It proved a time heavy replacement. An indication of things to come with the Swift. The replacement started by carefully drilling out every rivet, placed at one-inch intervals along the chassis. This time-consuming operation allowed us to remove the floor fully intact, enabling it’s use as the perfect template for making the new floor. This also allowed us to use the existing rivet holes, retaining as much strength in the chassis as possible. While the removal, recreating and reattachment was seriously heavy on the man hours, I think we can all agree that the result is spot on, giving us the confidence to get the right foot down without the worry of any Flintstone re-enactments.

Upon completion of the shiny new bottom guard it was time to sit back with a well-earned cup of tea and peruse the next steps in the user manual. We were surprised that a small Formula Ford chassis manufacturer would go through the painstaking procedure of creating a user manual. It stands to testament of the professionalism of the Formula and the companies involved in it and proved invaluable throughout the re-build process. We followed the recommendations of the user manual that several key components of the car be crack tested. As such, our next step involved removing the suspension components for the all-important testing.  All the parts were given a clean bill of health, whilst to some it may appear an unnecessary expense it has provided us the peace of mind that they are in the best condition for the track. A mechanical failure that wrecks your race, or worse still the car or you driving is the last thing anyone wants, taking steps to ensure this won’t be the case is worth it in our eyes.

Suspension was a continued theme. Following the crack testing we began the reconditioning of all the suspension arms and push rods with a full clean, fresh paint, new bearings and rose joints. For such a small, single seater race car it runs on an extraordinary number of rose joints and bearings. Every moving joint has at least one bearing, unlike the majority of road, or road to race cars there was not a rubber bush in sight! With reconditioning complete we decided to truly overhaul the suspension, with new adjustable dampers. These will allow us to fine tune the handling characteristics, once you get to grips with what changes you need to make, when, they’re truly worth their price tag and can make all the difference come race day.

It was time to move onto the heart of the race car, the engine. Thankfully this is always handled by Paul, my father, and is most definitely his area of expertise. Between us we make the perfect team. We keep it nice and simple; he’s the engine man, I’m the suspension man. We’re never tripping over each other or arguing over differing solutions to any issues.

Of course, it would be rude for us not to give you a quick synopsis of what he’s been up to. We started with a brief check over the engine whilst it was still intact. It was always the plan to fully rebuild it. We were aware, from the previous owner, that it hadn’t been rebuilt or inspected for at least two years, so we were keen to give it a full health check. Initial signs were promising, with acceptable levels of compression on all the cylinders, we continued to strip the engine. The positive vibes remained, with all the machining on the head looking professional and all measuring up to be legal for the FF1600 regulations. Upon inspection of the bores we made the decision to install new liners, whilst with many other cars you’d re-bore and use a slightly bigger piston, FF1600 regulations state you can only use the standard piston size. Making new lingers the only option. Following the success and reassurance gained from crack testing the suspension components we decided to opt for the same testing on the pistons and crank.

At this point our good luck took a hit, with less fortunate results on a second set of crack testing. It found that the pistons were starting to develop stress cracks and the crank was bent. This in turn saw our budget for the rebuild take a dent, as alongside the new bearings, shells, piston rings and gaskets that go hand in hand with an engine rebuild, a set of pistons and a new crank were now also on the list. From there it was a fresh paint job and assembly, being meticulous to detail throughout, which will hopefully pay dividends come race time.

We’ve got plenty of jobs left to tick, plenty of man hours and numerous cups of tea to go in the rebuild, over the next few days we should start to see more of the components coming back together. With it that sense of achievement should return. Hopefully all of our meticulous work will pay off when it comes to race day. We’ll keep our blog updated with the progress we make with the latest car on the fleet.